Microwave communication constitutes a very broad area of technology and communication but it can be broken down into two groups of products: Point to Point Communication for broadcast and data and Wireless Networking.

Antennas are at the front end of transmit/receiving data and there are several key specs such as aperture size, EIRP (effective radiated power), and the radio or control source where the payload information originates from.  As seen in the graphic below, weather and physical distance from one antenna to another affect overall throughput across the wide spectrum of RF energy bands: 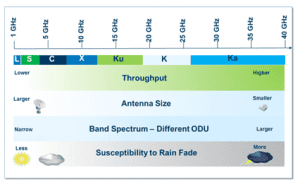 The quality of the radio, in particular its noise floor and sensitivity rating are influenced by the quality of the components inside it.  The concept of GIGO (garbage in, garbage out) applies here because if you’re sending or receiving encoded messages or using a modulation (AM/FM, QPSK, BPSK, QAM, LTE) that isn’t suited for the communication distance and data type being transmitted, the quality of your microwave network will suffer as a result.

A point-to-point connection refers to a connection between two nodes or endpoints.  An example is a telephone call, in which one telephone is connected with one other, and what is said by one caller can only be heard by the other. This is contrasted with a point-to-multipoint or broadcast communication topology, in which many nodes can receive information transmitted by one node. Other examples of point-to-point communications links are leased lines, microwave relay links, and two way radio. Examples of point-to-multipoint communications systems are radio and television broadcasting.